Next fight of Stanyslav Skorokhod is not determined yet. As part of the first evening of boxing in Kiev, after the start of the coronavirus pandemic in the main event, Aram Fanyan (17-1, 2 KOs) of Sparta Boxing Promotion scored a spectacular KO victory in the first round with precise body punch over Nadzir Bakshiyev (5-10-3) from Belarus. The time was 1:12. Live broadcast of the first boxing event in Ukraine after the outbreak of the coronavirus pandemic, which will be held in the Atlas concert hall in Kiev, and which will include six amateur Women's boxing league fights and five professional fights. In addition, after a week of anticipation, the full card has been announced.

In the main event, Stanyslav Skorohod will take on Mexican Super Welterweight champion Jose Luiz Zuniga. Zuniga’s only loss in the past six years has come to blue chip prospect and Commonwealth titleholder Josh Kelly on the road in the UK. Now, he travels to Canada to spoil the return of Skorohod, who proved to be a box office attraction in the Toronto region in 2017. The bout promises to be a tremendous style clash between a hardened Mexican pressure fighter and Skorohod who himself doesn’t like to take a backward step.

Skorohod’s countryman Oleksandr Teslenko will take the most meaningful step up of his career when he battles the United Kingdom’s Ian Lewison. The 37-year old, nicknamed “Lay ‘Em Out,” has developed a reputation as a big puncher, and a litmus test for some of the heavyweight division’s biggest stars, including Dillian Whyte and Joe Joyce, whom he has fought in his most recent outings. A win over Lewison would be a tremendous statement for Teslenko, and allow him to align himself with names like Whyte and Joyce.

NABA and NABO middleweight champion Patrice Volny will continue to test himself, as he faces the undefeated Nicolas Holcapfel. Holcapfel is an 18-year old prodigy from Slovakia, who has scored knockouts in nine of his ten professional victories. The Slovakian will be fighting outside of his homeland and Hungary for the very first time in the paid ranks. Volny will look to score a big victory over an undefeated opponent and continue his rise up the middleweight rankings in two different sanctioning bodies.

2012 Olympian Custio Clayton will continue his own march towards a world title, and in doing so, will have to get past a former world champion in DeMarcus “Chop Chop” Corley. Corley has fought the best of the best in his career, including Floyd Mayweather, Zab Judah and Miguel Cotto. A veteran of two decades of ring wars, Corley is a dangerous task for Clayton as he introduces himself to the Toronto boxing market.

Tickets are available at the Mattamy Athletic Centre website and start at just $45. On March 29, two of boxing’s true hotbeds will combine for one exciting night of world-class boxing: Ukraine and Canada.

Three of Ukraine’s top contenders will be in action at the Mattamy Athletic Centre as a part of Lee Baxter Promotions latest event in downtown Toronto, Ontario.

In the main event, super welterweight standout Stanyslav Skorokhod makes his long-awaited return to Canada. Skorokhod (17-2, 12 KOs) was a competitor in ESPN's prestigious Boxcino tournament, and had a lengthy and storied amateur career in his homeland, fighting in the same amateur system that has produced Vasyl Lomachenko and Oleksandr Usyk. The 29-year old is coming off a controversial split decision loss to Aram Amirkhanyan last June in a bout many observers believe he won clearly. Now, he returns to Toronto, the site of two of his most thrilling performances—knockout wins over Fernando Silva and Nestor Garcia.

“The night Stan fought Fernando Silva at the Powerade Centre in Brampton was undoubtedly one of the liveliest boxing crowds we’ve ever had in Ontario,” said Baxter. “I know the Ukrainian-Canadian community can’t wait to see him again, and we can’t wait to give them another tremendous show.”

In light heavyweight action, Vyacheslav Shabranskyy will return to the ring for the first time in over a year. Shabranskyy has established himself as one of the top contenders, and most exciting action fighters in the 175-pound division. The Zhytomyr, Ukraine native made his professional debut in 2012 and rattled off 17 straight victories and 14 knockouts. Now 19-2, Shabranskyy’s only two blemishes on his pro record are losses to Sullivan Barrera and Sergey Kovalev, two of the very best light heavyweights on the planet.

“Shabranskyy has gone toe-to-toe with the very best in the light heavyweight division. Not only does he know what it takes to make it to the top, but you know he’s going to be in a war each and every night as he tries to get there. He’s both a fan’s and a promoter’s dream,” said Baxter.

Finally, Ukrainian heavyweight prospect Oleksandr Teslenko will be in action in his adopted hometown of Toronto. The monstrous power puncher, who is promoted by Lou Dibella, made waves in 2018 with wins on Broadway Boxing, and on the undercard of Stevenson-Gvozdyk. With an amateur pedigree of 247 fights (with 224 wins), Teslenko is considered to be Canada’s—and Ukraine’s—possible best shot at a world heavyweight title in the near future.

The undercard will be rounded out by local favorite Nick Fantauzzi, Ross Mylet, and the professional debut of former Canadian national amateur champion Amanda Galle.

Broadcast of the boxing evening from Kiev at the arena of the Sports Palace, in the main events of which Stanislav Skorokhod, Karen Chukhadzhyan and Denys Berinchyk will have their next battles. 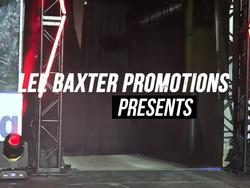