In the first quarter of next year, a fight between the interim world champion in the second middleweight should take place David Benavidez (26-0, 23 KOs) and Caleb Plant (22-1, 13 KOs). Boxers reported on social networks that contracts for this fight have already been signed. The World Boxing Council (WBC) is due to schedule a bout for the interim super middleweight title between David Benavidez (26-0, 23 KOs) and Caleb Plant (22-1, 13 KOs). The fight should take place in the first half of next year in the United States. In a duel between former world champions David Benavidez (26-0, 23 KOs) effectively knocked out David Lemieux (43-5, 36 KOs) in the third round and won the interim WBC super middleweight title in the main event of the evening at Gila River in Glendale, Arizona. David Benavidez (25-0, 22 KOs) and David Lemieux (43-4, 36 KOs) hit the super middleweight limit at the official weigh-in ceremony ahead of the Glendale boxing night. The bet of the fight will be an interim WBC world champion belt. The weight of Benavidez and Lemieux turned out to be the same and amounted to 75.4 kg. This coming Saturday in Glendale, Arizona, a boxing evening will take place, in which the unbeaten two-time world champion David Benavidez (25-0, 22 KOs) will fight the former world champion David Lemieux (43-4, 36 KOs) for the interim WBC super middleweight title. The boxers met face to face for the first time at the final press conference. The evening of boxing will be broadcast on Shouttime. 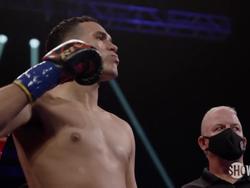 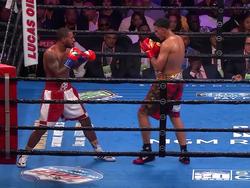 WHAT IS DAVID BENAVIDEZ'S RECORD?

WHAT WAS BENAVIDEZ'S LAST FIGHT?

David Benavidez's last fight took place against David Lemieux on May 21, 2022,. He won by TKO in the 3 round. That fight was 6 months and 5 days ago.

HOW ACTIVE IS DAVID BENAVIDEZ?

Benavidez's last 3 fights have come over a period of 1 year, 2 months and 8 days, meaning he has been fighting on average every 4 months and 22 days. In those fights, he fought a total of 21 rounds, meaning that they have lasted 7 rounds on average.

WHERE IS DAVID BENAVIDEZ FROM?

Benavidez was born in USA.

HOW OLD IS DAVID BENAVIDEZ?

HOW TALL IS DAVID BENAVIDEZ?

WHAT IS BENAVIDEZ'S REACH?

WHAT STANCE DOES DAVID BENAVIDEZ USE?

Benavidez fights from a orthodox, which means he favours his right hand as his power hand when fighting.

WHAT WILL BE DAVID BENAVIDEZ'S NEXT FIGHT?